The psychological impact of procrastination 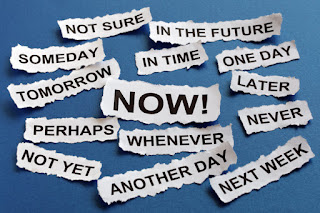 Over the last few days we’ve been looking at the issue of procrastination, exploring why we procrastinate, and looking at strategies to help us stop doing it.

A 2007 study published in the psychological bulletin suggested that the link between depression/low mood and over-procrastination was very strong. This is perhaps not a surprising finding. If we procrastinate over a task, we may feel hopeless in our abilities or helpless to get things done. That in turn may lead to low mood and depressive symptoms. This can often turn into a bit of a cycle. The more we procrastinate, the more hopeless and helpless we feel, and the less likely to undertake tasks we know we need to do. In other words, we procrastinate more.

Procrastination has also been linked to obsessive compulsive disorder (OCD). Studies suggest that over-perfectionism, common in OCD, can result in people putting off tasks because they feel they’re not capable enough to undertake them perfectly. In addition, the fear of making mistakes when undertaking new tasks, which people with OCD often experience, may lead them to procrastinate. Much like with depression, this can lead to an unhelpful cycle in which OCD leads to procrastination which leads to an increased fear of not being perfect which leads to a reliance on obsessive behaviours or thoughts.

In addition to OCD and depression, ADHD can also have an impact on procrastination, and people with ADHD may feel distressed by their levels of procrastination. When you’re extremely distracted by internal thoughts or external stimuli, it can be hard to focus on executing tasks. Ultimately, ADHD can make procrastination more pronounced.

This sense of perfectionism perpetuated from high anxiety can also eat up enormous amounts of time, leaving limited time for other more important tasks. For example, someone with high anxiety that is looking to develop their self-esteem may say “I will undertake this self-esteem course until I know everything about self-esteem”.

That desire is evidence of perfectionism due to the individual’s high anxiety, it’s also totally unnecessary and eats up a lot of time ­– time that could be spent improving their self-esteem.

The psychological impact of procrastination is massive, it can lead to or exacerbate mental health difficulties such as depression, OCD and anxiety. Of course, this is not always the case but in order to understand procrastination fully, it's helpful to have an understanding of some of the other difficulties it relates to.

Posted by First Psychology Scotland at 11:17