How to protect yourself and others from cyberbullying

With most of the world’s population now using the internet and social media on a daily basis, cyberbullying has become widespread in today’s society. Not only is this form of online bullying targeted at children, but adults can also find themselves becoming the victims of online abuse.

How to recognise cyberbullying

In order to tackle this serious issue, we must first learn to recognise the signs of cyberbullying so that we can take necessary steps to avoid and prevent it.

Cyberbullying is when someone uses digital technology such as the internet, social media, mobile phones and gaming platforms to upset, abuse, threaten, slander or harass an individual. For example:


This kind of intentionally cruel, aggressive and abusive behaviour can have a severely damaging effect on the person that’s being targeted, and they might experience anxiety, stress or depression. A study undertaken by the universities of Oxford, Birmingham and Swansea showed that cyberbullying increases the risk of suicide, mental disorders and self-harm. This is a serious issue but there are ways to protect yourself from cyberbullying.

Ways to protect yourself

Tell someone – Although bullies often use threatening tactics so their victim will be too afraid to tell anyone, you must speak up about it. Talk to a schoolteacher, an adult that you can confide in or the police.

Save evidence – Make sure you keep any evidence of cyberbullying. Take screenshots of online messages or posts they have made and save any emails that you’ve received.

Don’t reply – It might be tempting to retaliate or respond to the bully, but try to resist and ignore anything they send to you. Bullies aim to get a reaction and if you don’t fall into their trap, they are less likely to continue harassing you.

Block them – Fortunately we are able to block specific people from most online platforms, including mobile phones, social media accounts and emails. Make sure you only accept people who you know on your accounts and only give out your phone number to those that you trust.

Don’t take it personally – Even though you might be receiving messages that are aimed directly at you, remember that cyberbullies are usually unhappy with their own lives which is why they take pleasure in harassing others. It might be that they’re insecure or jealous, but their bullying tactics say more about them as a person than you.

Remove your profile – If the bully still finds a way of abusing you even though you’ve blocked them from online accounts (maybe they’ve set up a fake profile), you can always remove your own profile or account so that they have no way of contacting you.

Avoid the internet – It may seem difficult at first to totally abandon social media but take some time out from the online world. Instead, spend time doing a hobby that you enjoy, an outdoor activity or just being with close friends in a social situation. This will help take your mind off the cyberbully and once they realise you’re not responding or available online, they might decide to leave you alone.

If you or someone you know is experiencing cyberbullying and you’d like some further information: visit our blog for more about this topic and how to help protect a child >


Posted by First Psychology Scotland at 13:53 No comments:

Understanding our sexuality is something that we all will have experienced at some time in our lives, but this can be particularly difficult to understand if we find that we don’t fit into society’s 'norms'. Although gender and sexuality are much more widely accepted in today’s society than they used to be, there are still many issues you might face when coming to terms with who you are.

Unfortunately, discrimination due to gender or sexuality is still prevalent and can lead to bullying and mental or physical abuse, which can be extremely damaging to your wellbeing. There are many issues that you may be concerned about:


Not everyone is confident in themselves and it may be that you have low self esteem as a result of the issues you are facing. Feeling afraid and vulnerable can have a huge impact on mental health if you don’t have anyone to confide in and are keeping your thoughts and emotions bottled up.

Over time, if you aren’t able to express yourself truthfully and you suppress your thoughts and emotions for too long, you could experience the following:


Worry and fear can have a damaging effect on your body as well as your mind and can cause an increase in stress, anxiety and depression, so it’s important to seek help and support and come to terms with your sexuality and gender in order to live a healthy life.

Ways to deal with your sexuality

There are lots of informative websites where you can learn about sexuality and gender identities. It's good to check these out and see which you identify with. It can also be comforting to know that there are other people who think or feel the same way as yourself and that you’re not alone.

When you recognise certain feelings, don’t deny them and push them aside, instead, try to accept them. It’s important to be honest with yourself rather than pretending to the world that you’re something you’re not.

Talking is a great way to explore your own emotions and find reassurance that whatever you’re feeling is okay. If at first you don’t feel comfortable enough to talk with someone you know, you can get lots of advice online and even join a forum where you don’t have to disclose your identity. This is a good way to get advice from others who have gone through something similar and it can make you feel less isolated.

Although it might seem like a difficult step to take, confiding in a close friend or family member might not be as scary as you think. Opening up will not only relieve some of your anxiety, it can also increase your self-confidence.

Mind has a helpful fact sheet that offers ways of coping with doubts about your sexual identity as well as providing details for organisations with a range of services related to sexuality.

You can also find out More about gender and sexual identity on our website.
Posted by First Psychology Scotland at 11:24 No comments:

Put the past behind you and create a new you

Life is filled with ups and downs. Sometimes we have wonderful experiences that bring us joy and other times we will go through bad situations that cause us heartache, but it’s how we use the latter experiences to learn and move on that’s important.

If you’ve gone through something traumatic, such as a failed relationship, the death of someone close to you or losing your job, these kinds of experiences can have a negative impact and seriously harm your wellbeing. If we allow our past to take a grip, it can affect our future decisions so it’s vital that we learn from the past rather than live there.

Remember that every situation we face in life will have a different outcome so try not to let one bad experience define your future or who you are. If we don’t learn to put the past behind us, we will continue to endure sleepless nights, anger, resentment, anxiety, stress and depression.

Rather than pushing our thoughts to the back of our mind, we should try and confront negative issues, deal with them and move on.

Ways to put the past behind you

If there is a particular situation or experience that is still having a negative effect on your mental health, face it head on and explore what you’ve learnt from it. When we spend time reflecting on our past, it makes it easier to accept and move forwards.


Focus on the present

By dwelling on the past, we continue to suffer negative emotions and feelings that cause constant distress, but by focusing on the present, we can start to feel happier. Practise mindfulness and meditation to keep your thoughts focused on the positives. Live in the moment and be grateful for all the things that bring you happiness.

Learning a new skill or enjoying new experiences will keep your mind occupied and make you appreciate the present day rather than looking back to the past. You could also take a short beak and give yourself some time to do the things you love so that you can completely switch off.

Spend more time with those who empower you

Spend more time with people who empower you and bring out positive emotions in you. The happier your present reality becomes, the less likely you are to look back on your past with regret or anger.

In this Ted Talk, psychologist Daniel Kahneman talks about how our experiences and memories affect how we view our happiness and how we behave in the future. This gives us a great insight into how we can change our way of thinking to lay the foundations for a better future.
Posted by First Psychology Scotland at 10:23 No comments:

Exercise your way out of anxiety 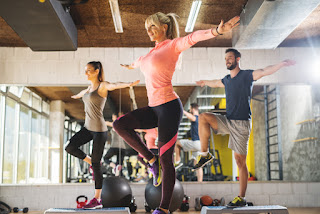 You may have recently joined a gym or local exercise class as part of your new year's resolutions. However, life often gets in the way and you will probably not be surprised to hear that many people have given up on their goals before the end of February.

What might continue to spur you on, is that losing weight, shaping up or gaining strength are not the only reasons why we should incorporate regular exercise into our daily lives. Research suggests that exercise can improve mental health and wellbeing and further studies have shown that anxiety in particular can be effectively managed in many cases with exercise.

Anxiety is a common issue that people experience and exercise is a simple, accessible way to take action while on a waiting list or in combination with therapy or other treatments. So there is another reason to grab those trainers and to keep exercising past February!

However, if you have any underlying health issues, please consult your GP first and use the expertise of the instructors at your gym to ensure that your workout helps you meet your goals without any side effects.
Posted by First Psychology Scotland at 10:28 No comments: